Inside: Here are some awesome pumpkin carving how-to’s just in time for Halloween. Whether your kids create a fire-breathing pumpkin, use stencils or bas-relief—these pumpkin carving ideas are simple to read and easy to follow.

Don’t you just love the fall holidays? They are surrounded with excitement, anticipation and just downright family fun! Like every holiday, Halloween has traditions that although repeated year after year, they never lose their charm.

Which brings me to some pumpkin carving questions: 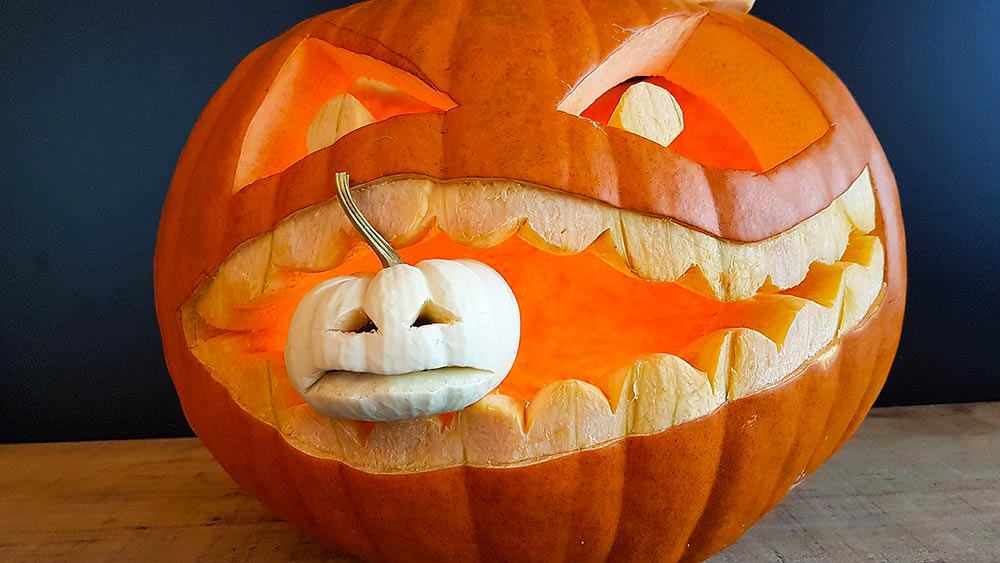 The orange skin of the pumpkin has been removed which gives the teeth more depth.

We can thank the Irish for the tradition of carving pumpkins and for Irish immigrants bringing this tradition to the United States. However, Ireland did not grow pumpkins or carve pumpkins—they carved turnips or gourds—a tradition passed down from the ancient Celtic cultures in Ireland.

On All Hallow’s Eve, the Celtics carved turnips, root vegetables or other gourds and placed an ember in them to ward off evil spirits. The name, “Jack-o’-Lantern” came from the name “will-o’-the-wispor jack-o’-lantern.” It was a strange light that flickered over peat bogs and was tied to the legend of Stingy Jack (the town drunk).

When the Irish came to America in the 1800s, they were introduced to pumpkins and decided they were bigger and easier to carve—hence our Jack O’ Lanterns today are carved from pumpkins of all shapes, sizes, and colors.

What are your family traditions of pumpkin patches and pumpkin-picking?

Every year, our family took trips to various pumpkin patches. We marched out to the field with a camera, sturdy shoes and pumpkin cutters in hand looking for five of the most interesting and unusual pumpkins. 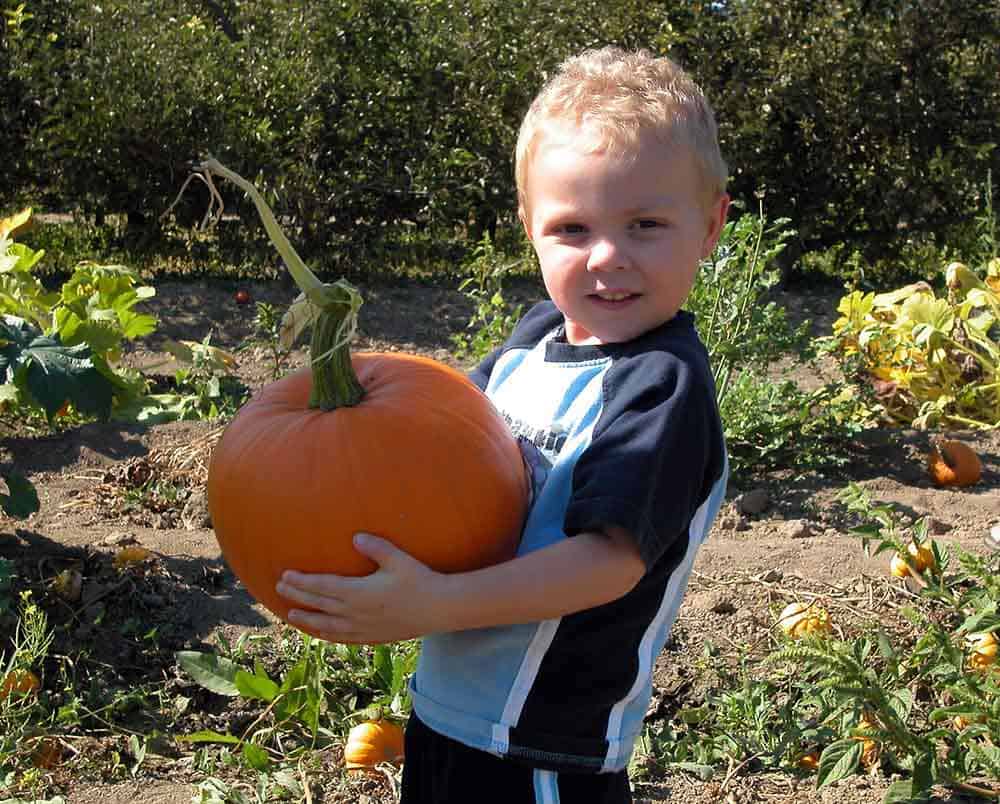 Kids love going to a pumpkin patch and finding their favorite pumpkin for Halloween. Notice the stem on this pumpkin…even an ugly pumpkin with a great stem turns into a fabulous pumpkin!

Next came the pumpkin carvings…

Pumpkin Carving How-To: From the Simple to the Intricate

At first, we carved pumpkins into simple Jack O’ Lanterns. Then we got bored. We wanted to create more interesting pumpkins—something dramatic that would draw trick-or-treaters from miles around to see. 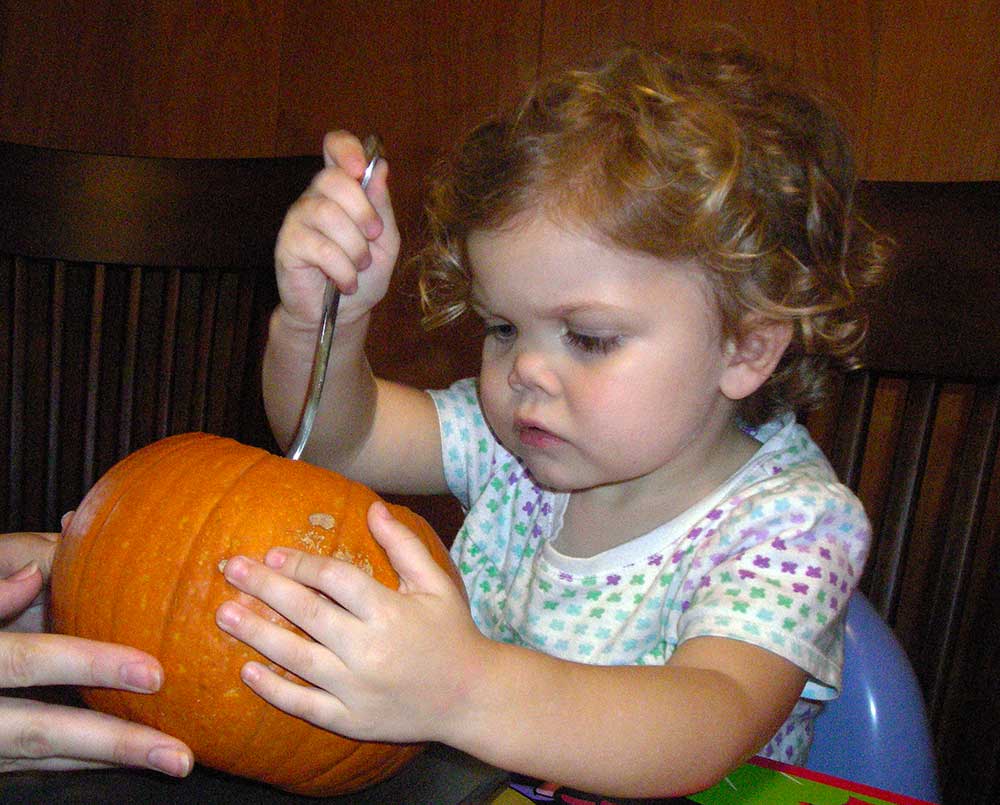 Even the littlest of people love to help carve or clean-out the pumpkins.

Depending on the ages of your kids, try one of these suggestions: 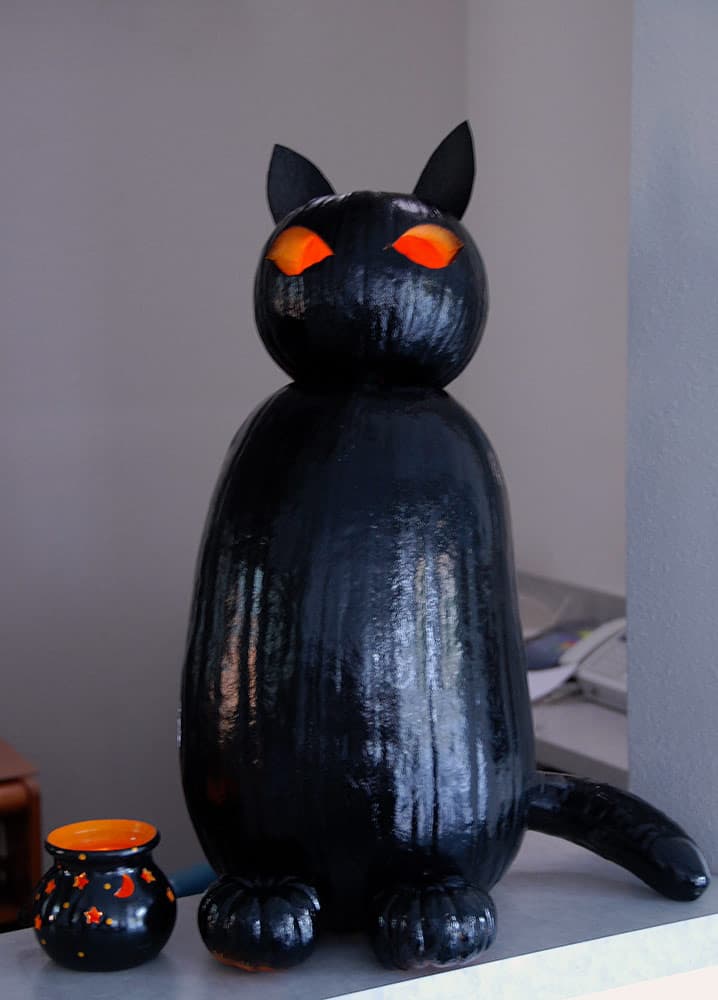 This is a spray-painted pumpkin made from different sizes of pumpkins and a cucumber.

Here are some suggestions:

The black cat above has 3 different size pumpkins and cucumber for a tail. 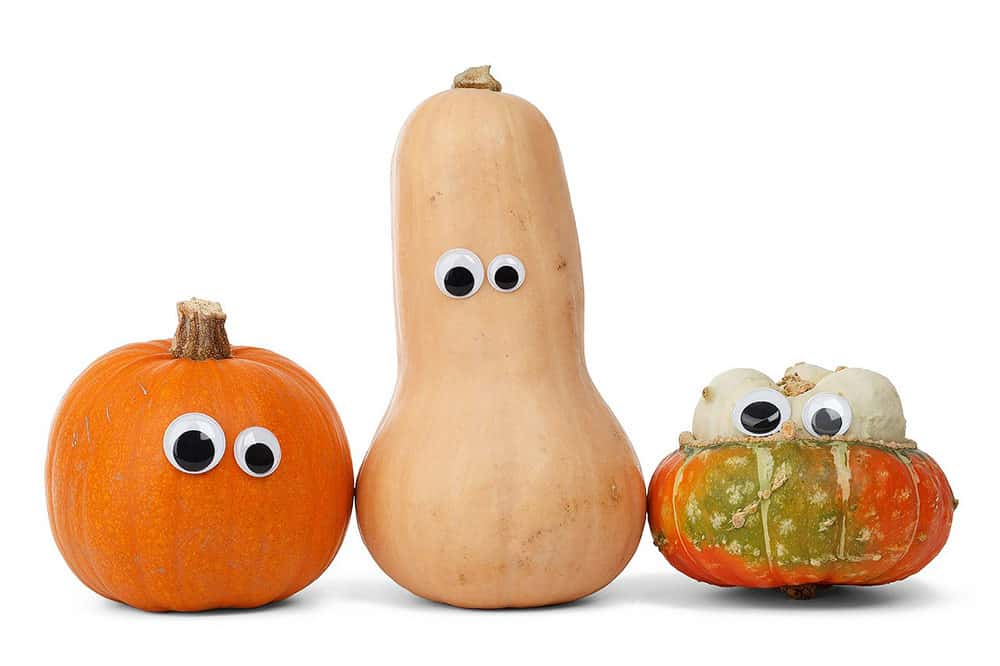 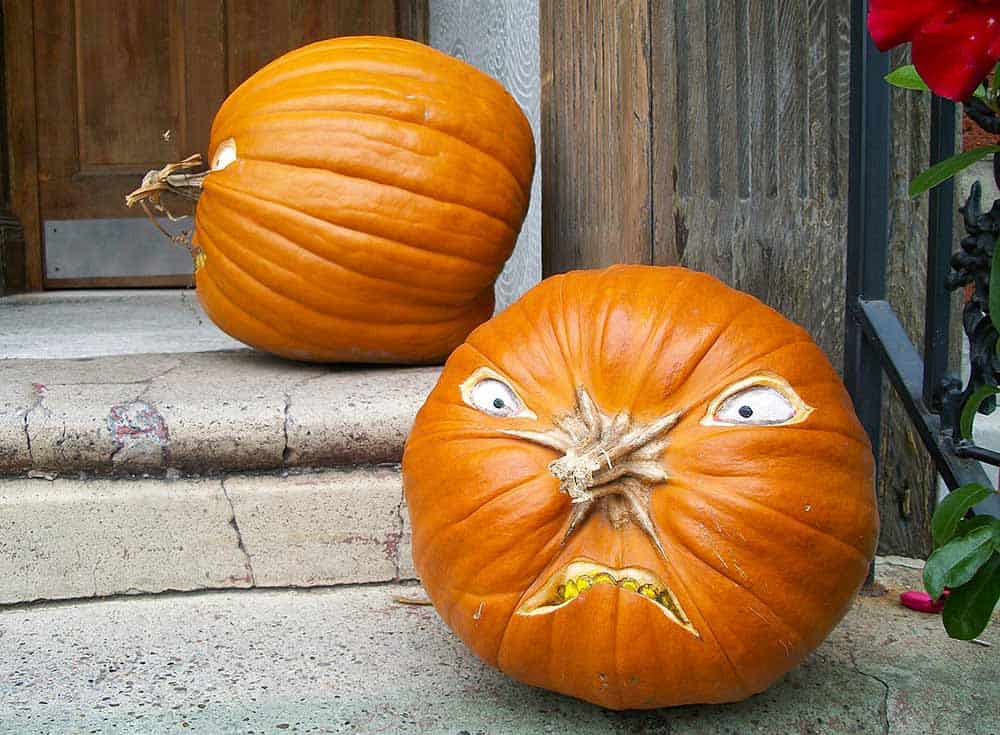 These upside-down pumpkins are easy to make and fun to display. Lay the pumpkin on its side; use the stem as the nose and carve the rest

Years ago, we started using stencils and specific tools for pumpkin carving. My husband is a dentist and would bring home some of his older drills home to carve details in the pumpkin (over-the-top, I know). Carving intricate pumpkins became a family tradition. 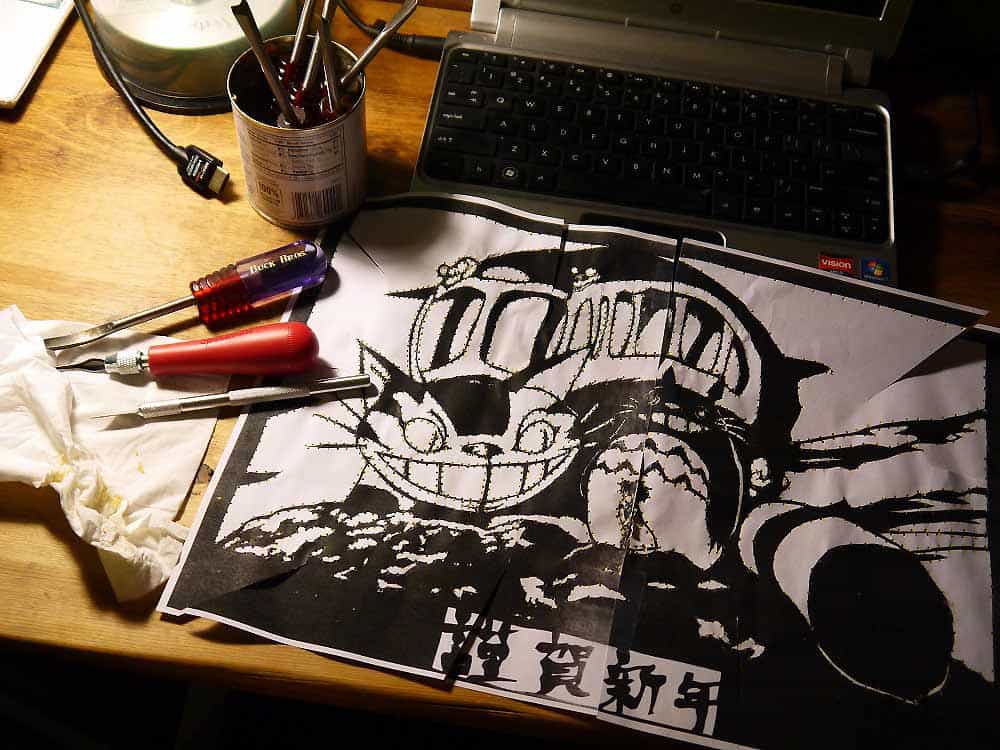 This is a stencil that my son Trevor created for his pumpkin. He blew up the image and then pieced it together in sections so that it would fit around the circumference of the pumpkin.

You can purchase Halloween stencils from Amazon. Here’s how to use them: 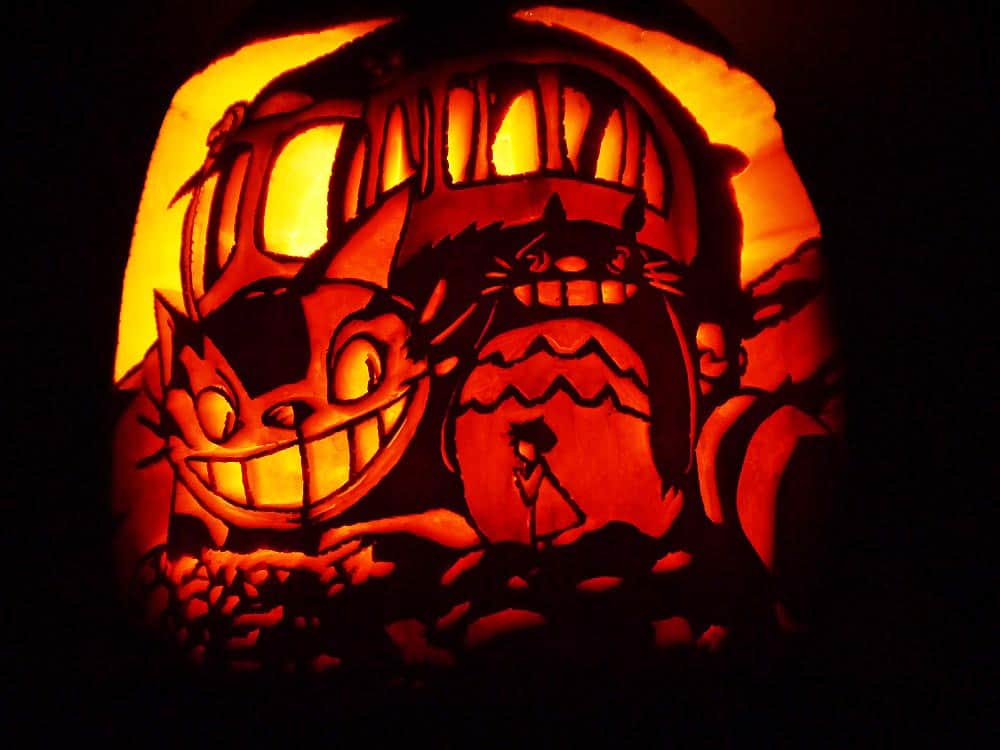 This is the final carving from the stencil above. The shading is achieved by leaving the skin of the pumpkin intact.

This kind of pumpkin-sculpting requires your child or teen to have a sense of spatial awareness or thinking. No template is involved—it’s all free-hand. 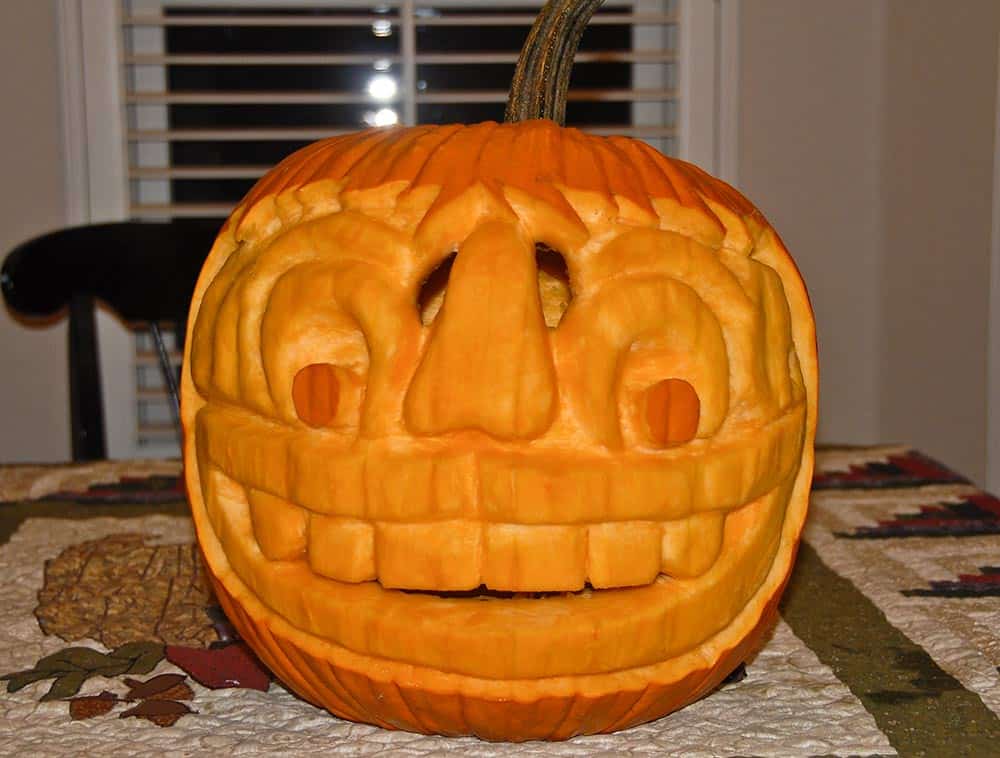 This is a bas-relief or sculpted pumpkin my husband carved.

Here are the steps to create a sculpted pumpkin:

If you carve a simple pumpkin there are ways of displaying it to make it look spooky and dramatic. Try adding dry ice for a fire-breathing pumpkin! 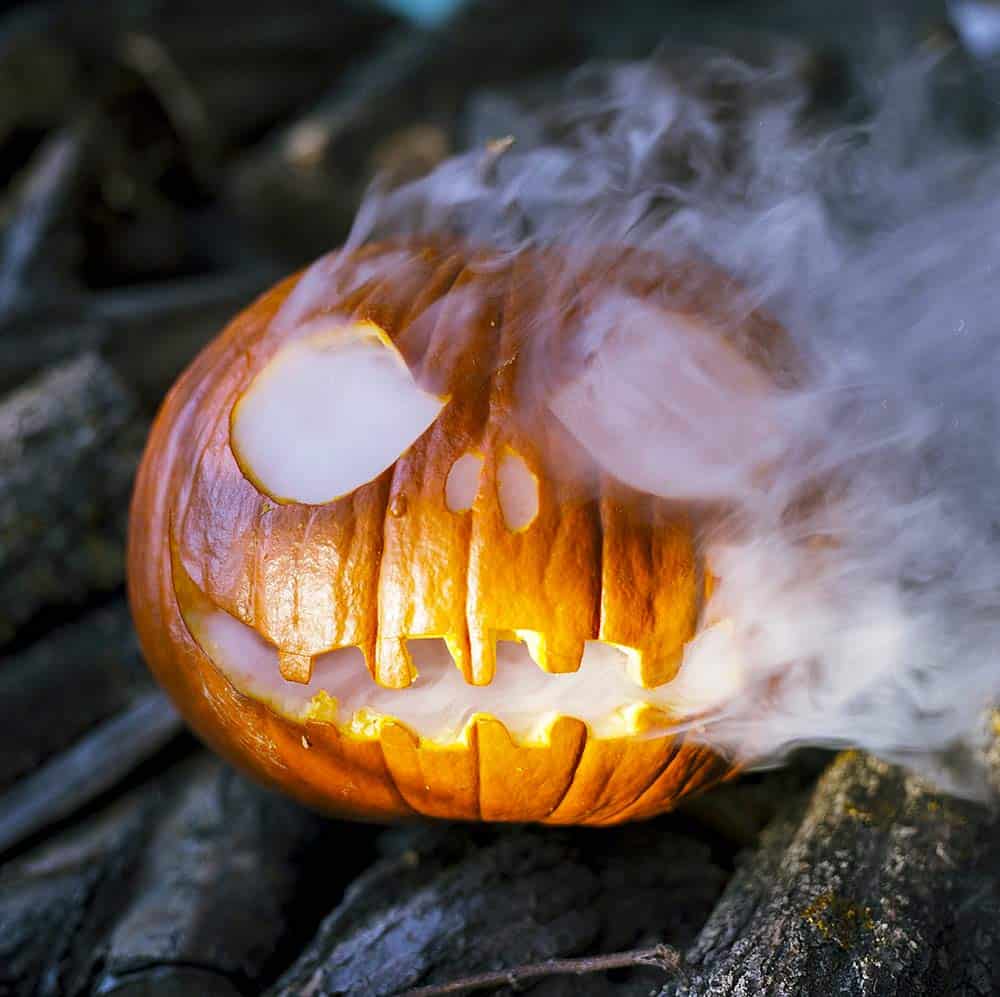 So with all this carving, sculpting and creating—what skills are your children and teens developing?

Pumpkin carving teaches kids fine-motor skills. They are cutting, cleaning, measuring, poking, painting, gluing and designing the pumpkin—all important fine-motor skills and ways to build their brains; their problem-solving skills, plus their creativity and imaginations. 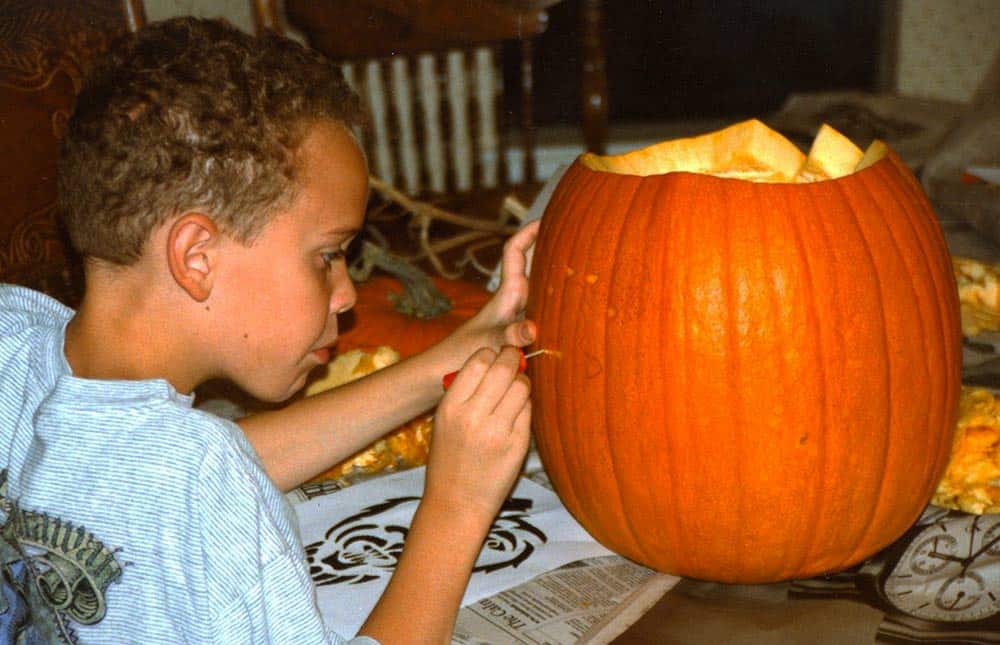 One of the ways our sons learned fine motor skills was by carving pumpkins.  This is Trevor carving a pumpkin using a stencil

Pumpkin carving also builds spatial skills in children. These skills are developed when children construct or re-construct shapes and patterns in their minds.

It’s what architects, engineers, artists, and mathematicians do—understand and navigate three-dimensional space. Remember Michelangelo when he visualized the human body trapped in stone? Same principle. These are great skills to develop when carving a pumpkin!

Passing the Baton & Tradition of Pumpkin Carving to the Next Generation 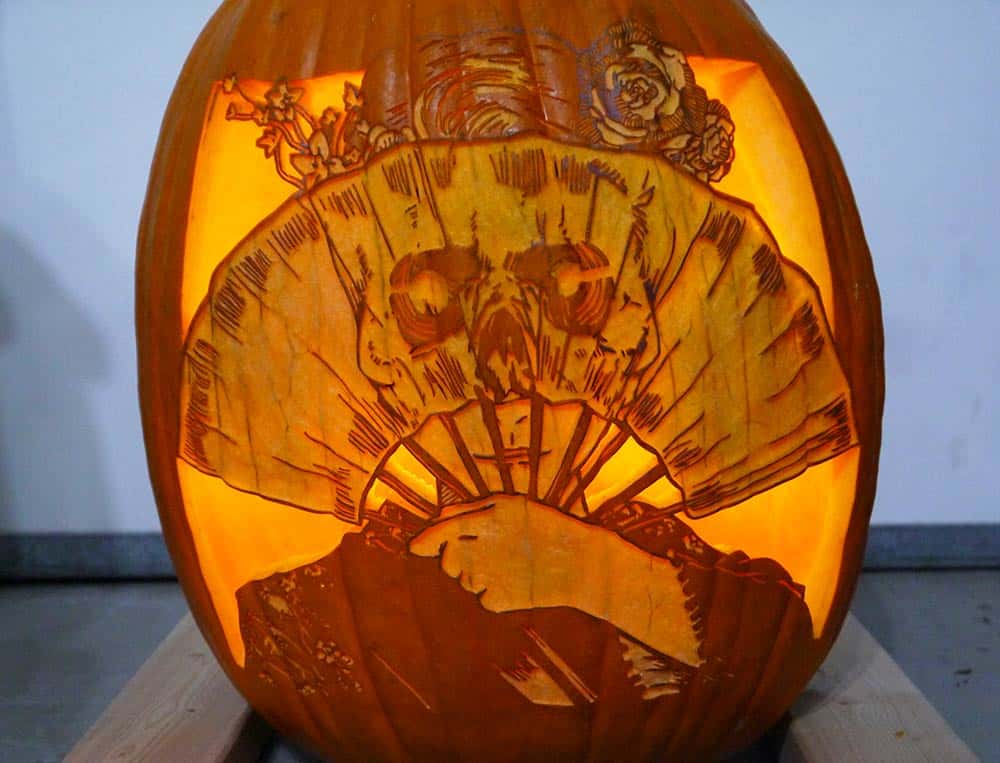 One of Trevor’s pumpkins he carved in 2018. Some of his creations are formed simply by seeing an image and then creating a stencil from it.

Pumpkin carving was an important family tradition and one that our sons now continue to do with their children. However, our youngest son, Trevor, has taken pumpkin carving to new heights.

He spends hours and an all-nighter before Halloween carving the most amazing intricate pumpkins I’ve ever seen. He started out using stencils, but now many of his creations are from looking at pictures and sculpting and creating what he sees (spatial intelligence). 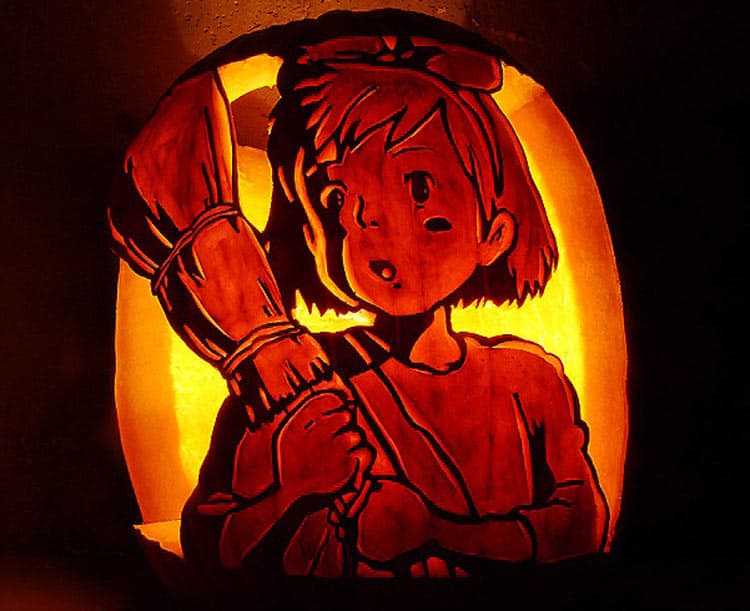 His wife, Moe has also joined in and she and their three kids help as well. It’s become a family tradition. A baton successfully passed to the next generation!

And yes, people come from miles around every year to see what he’s created. 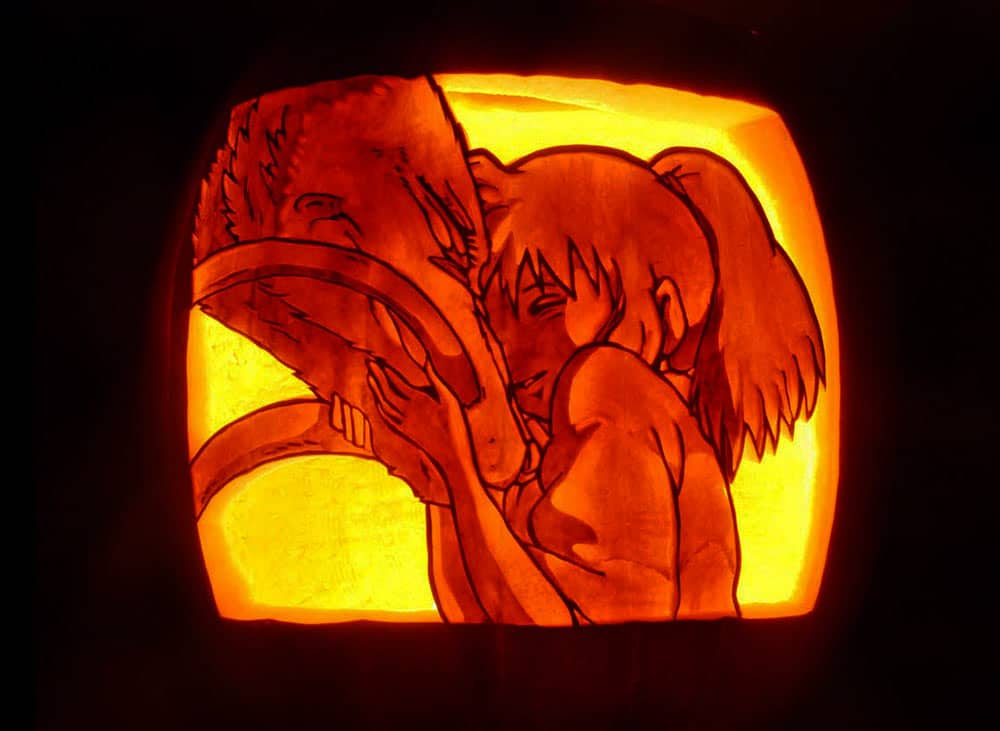 This is a pumpkin Trevor carved using a stencil. Notice the shading he achieved on this design. He uses the skin of the pumpkin and the underneath flesh of the pumpkin to create a 3-D image.

Here are some suggestions of books, stencils and pumpkin carving tools available on Amazon

What stories do you have of your family carving pumpkins? Please share in the comment section below. 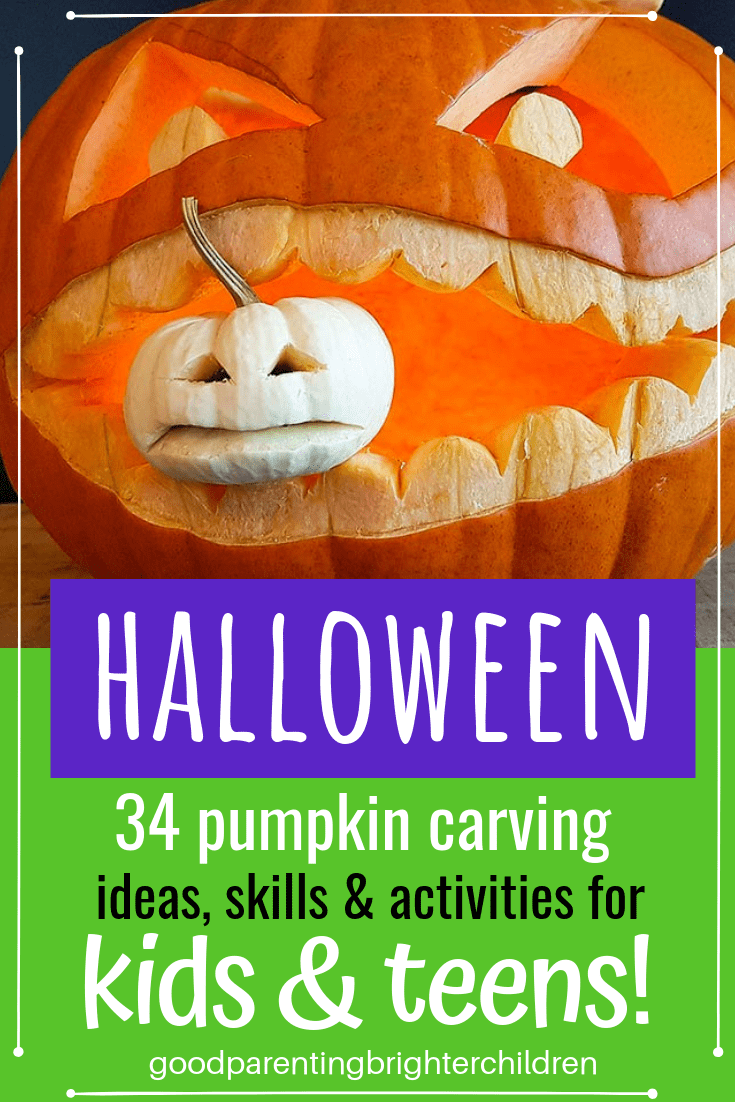 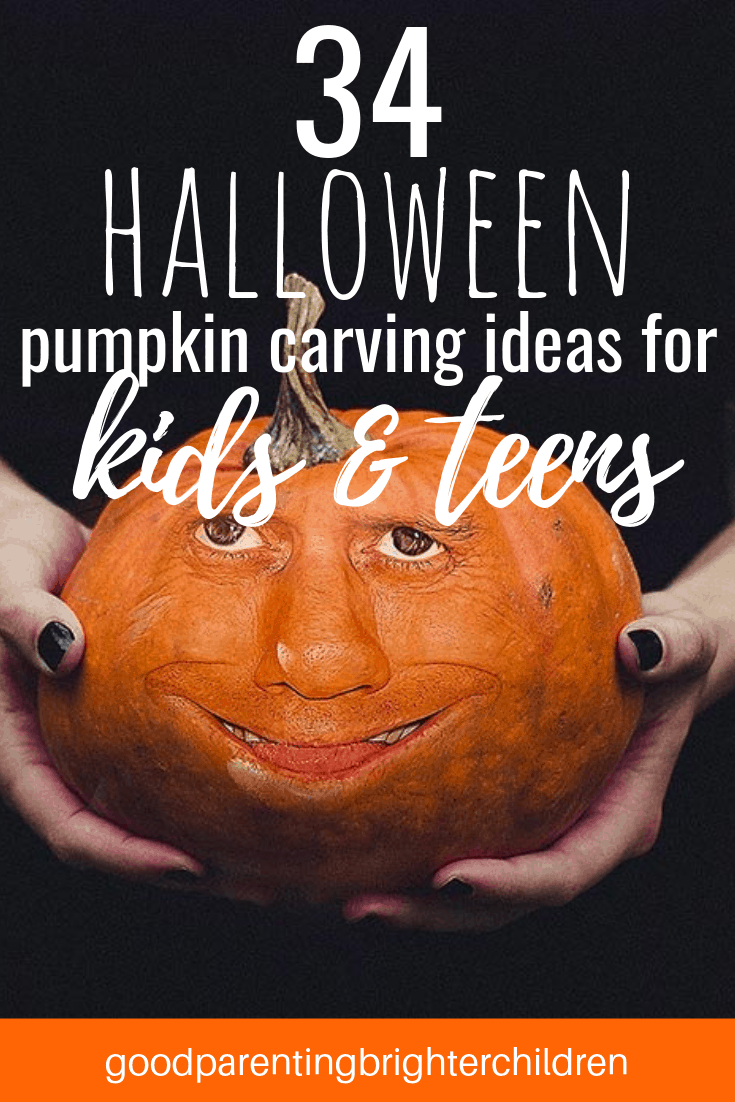 « Everything You Need To Know About Great Halloween Books
How to Make the Best Holiday DIY Sugar Scrubs with Your Kids! »

TALENT IS A NATURAL EVOLUTION AND CAN’T BE RUSHE

WHY IS THE DEVELOPMENT OF MUSICAL TALENT SURPRISIN

WHAT IS THE FORMULA FOR DEVELOPING MUSICAL TALENT

MUSIC: THE ANSWER TO MANY LEARNING DISABILITIES!

LEARNING DISABILITIES ARE ON THE RISE: HERE’S HO

EVIDENCE SHOWS THE POWER OF MUSIC PROGRAMS IN THE

HOW MUSIC PRIMES THE BRAIN FOR ACADEMIC SUCCESS L

12 IMPORTANT REASONS WHY WE NEED MUSIC IN OUR SCHO

AUTISM: A GROWING CONCERN Did you know that more