Inside: It is essential that your child’s school offer music programs that include singing, movement, learning instruments or having an opportunity to play in an orchestra, band or drumline. Here are 12 important reasons why we need music in our schools!

Music in our schools 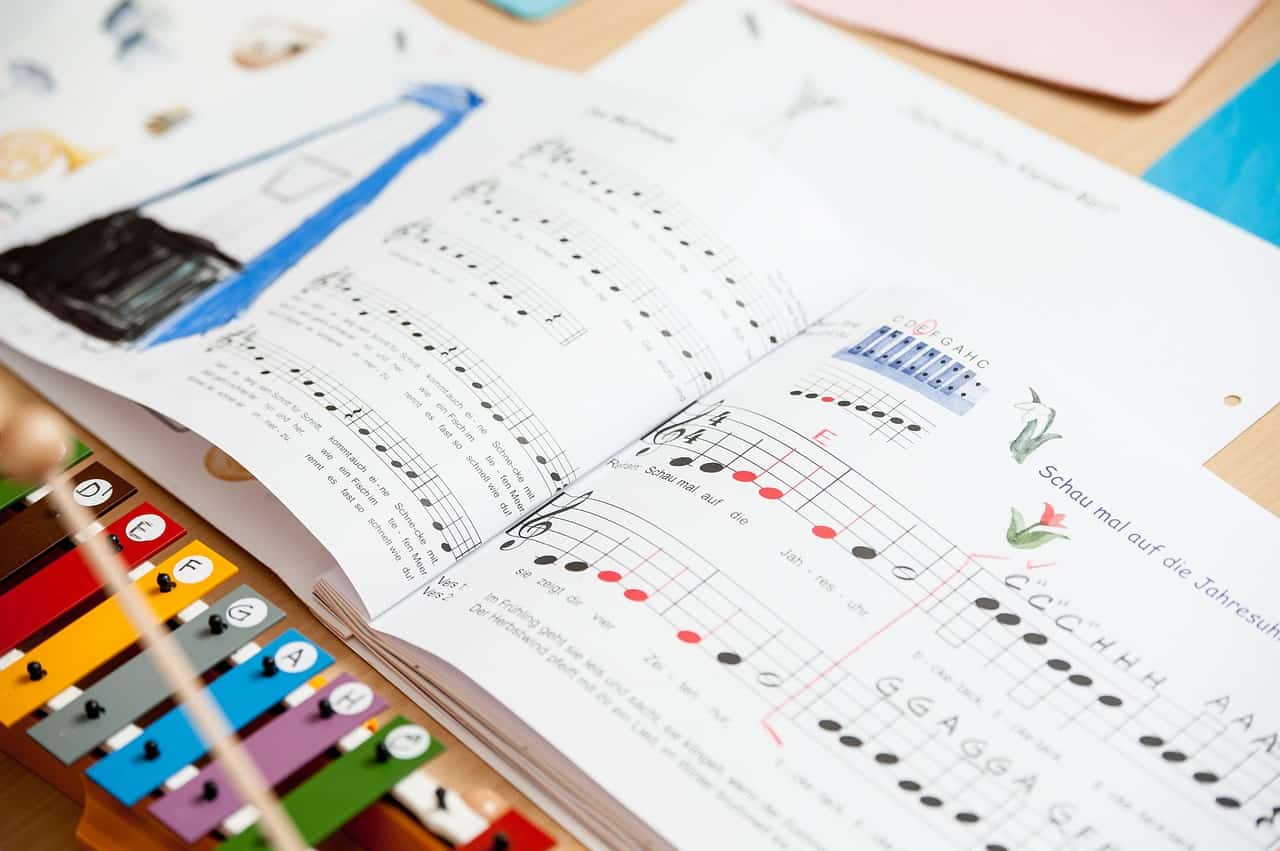 Music is the key to learning.  And children, tweens or teens who are exposed to music in our schools learn easier.

Does your child’s school offer mandatory music programs? Are these programs offered from kindergarten through high school? Is there more than one music teacher for all the students in the school?

Hopefully, your children are in a school district that has an excellent music and arts program beginning in kindergarten and continuing through high school.

Why? Because education in music and the arts has not only been shown to be an essential ingredient for our children’s academic success; it was mandated with the passing of two federal laws: Goals 2000: Educate America Act in 1994 and No Child Left Behind Act (NCLB) in 2001.

Both documents nationally recognized the importance of arts education and specifically list the arts—music, visual and performing arts—as core subjects’ students are to learn in school.

The term “core subjects” are topics or areas of education that every student needs to learn, no matter his or her future occupation and include the “3-R’s” of reading, writing, and math. Listing the arts as one of the core subjects (the 4th “R”) was an important designation that was meant to give the arts distinction in the classroom and qualify school arts programs for federal grants.

Music in Our Schools: Mandated by Law 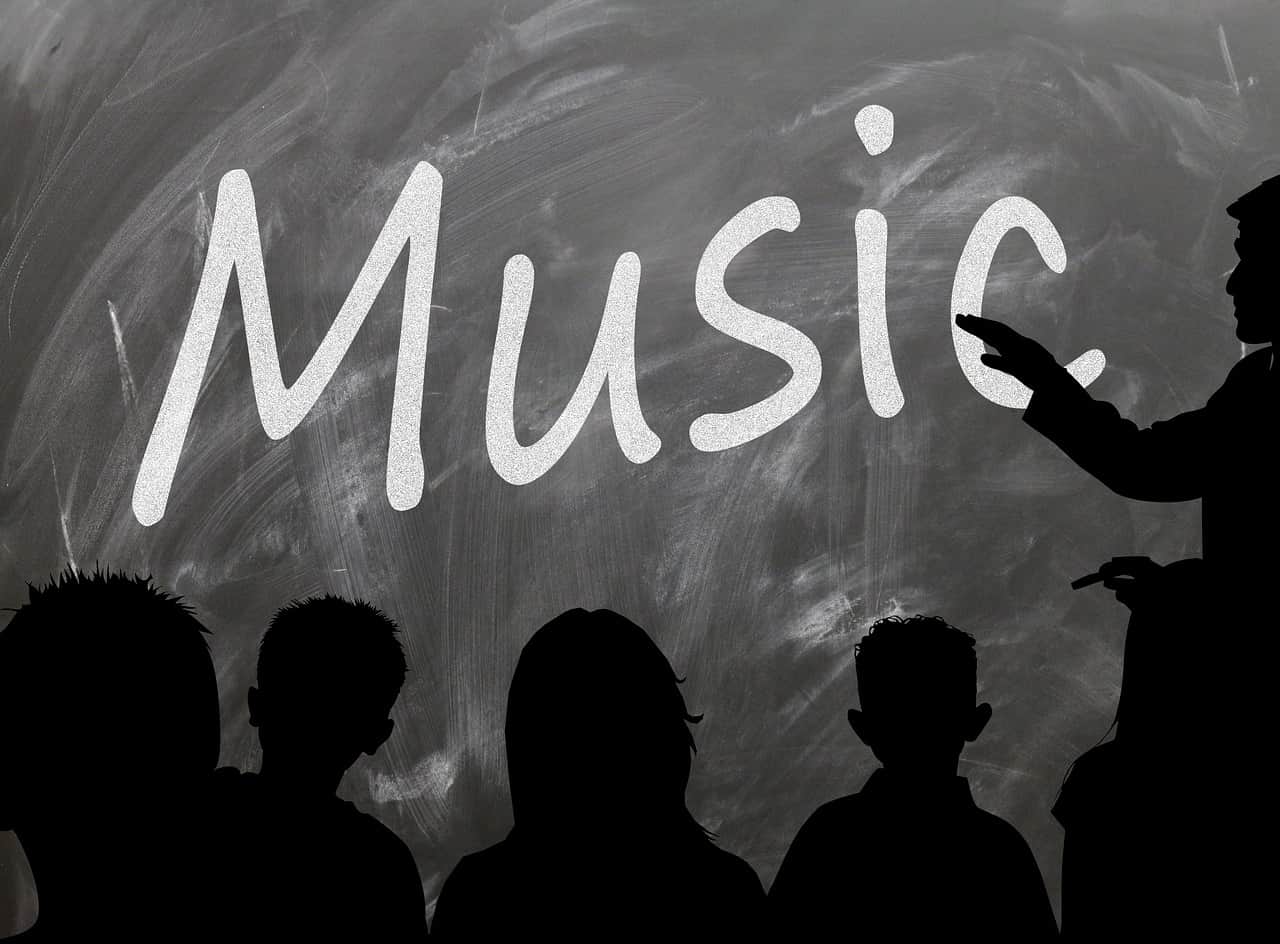 Mandatory music programs in the schools have been mandated by 2 laws: Goals 2000: Educate America and No Child Left Behind

However, even though the arts were mandated by law and nearly all 50 states have arts-education standards and dozens of reports and statistics show support for the arts, what is really happening with school music programs varies from school to school.

The sad reality is: music, visual and performing arts education have been relegated to the sidelines or narrowly eliminated in most schools nationwide. “The disparity between what schools offer and what students actually receive can be enormous,” says Richard Kessler, Dean of Mannes College the New School of Music.

The bottom line: mandates and policies for the inclusion of the arts in classrooms across the United States have become nothing more than empty talk as school districts zero in on test scores and incrementally eliminate the arts.

This is unfortunate because if school administrators and decision-makers actually looked at the research, they would see that music education INCREASES a child’s ability to learn thus increasing test scores as a natural evolution.

Music in Our Schools: The Evidence 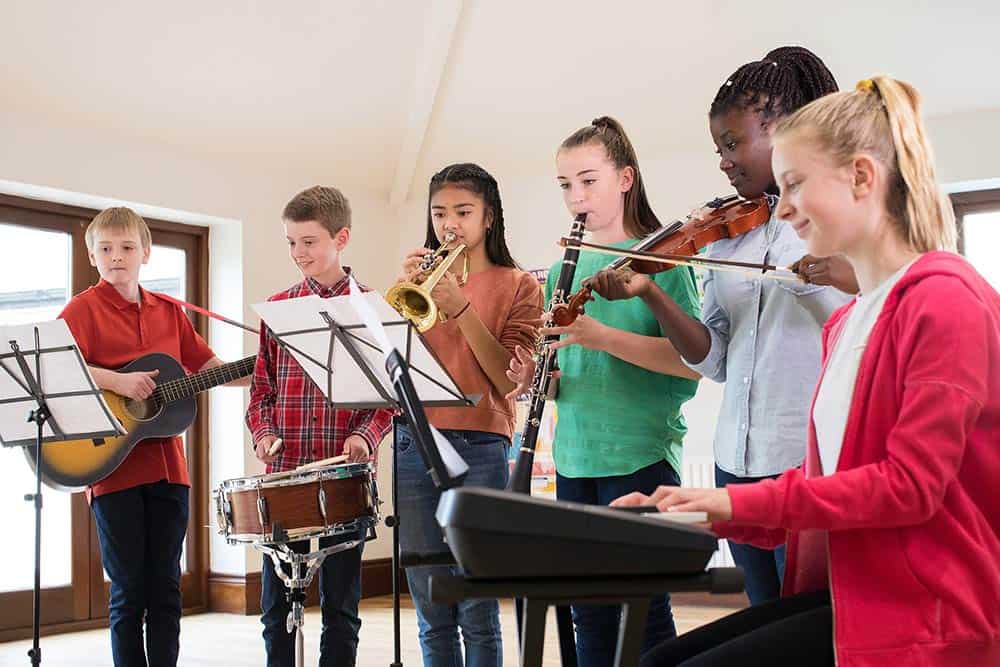 Schools that have music and arts programs have better test scores, attendance and create children with better problem-solving skills

Here are some questions parents, teachers, schools and school districts should ask:

Music in Our Schools: The Studies

Here is a partial list of studies showing the necessary role music plays in the education, brain development and learning of children and supports the need of having comprehensive music programs in ALL schools across America: (refer to my book for references)

The very systems that music nourishes—our integrated sensory, attention, cognitive, emotional and motor capacities—are the driving force behind all other learning. (Konrad)

The arts can provide effective learning opportunities for students by increasing academic performance and better skill-building and reducing absenteeism. (The Impact of Arts Education on Workforce Preparation) 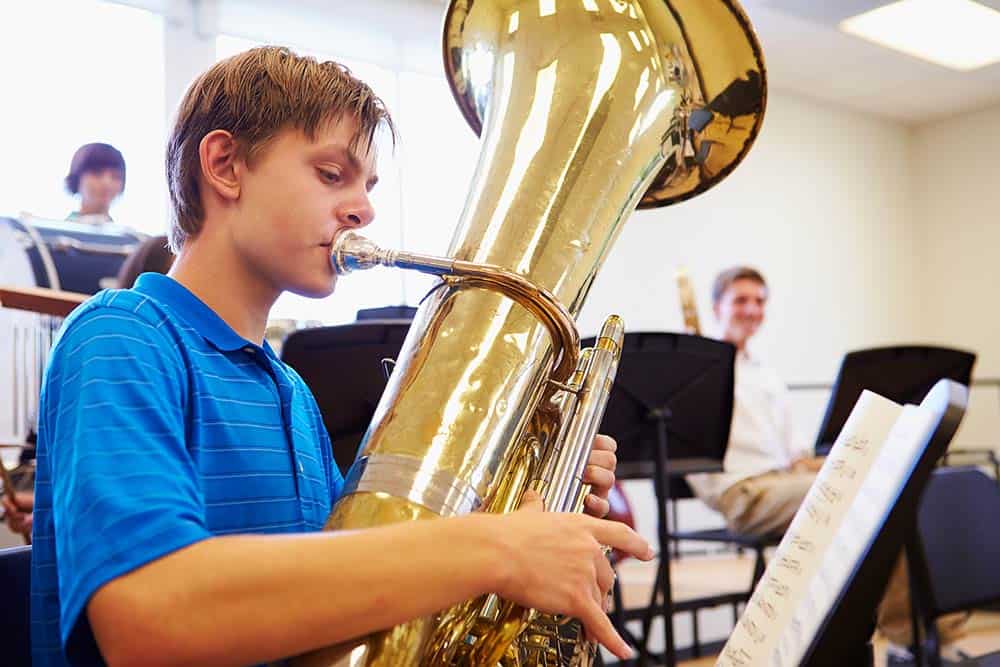 Did you know that schools that offer music programs have students who do better in math, learning languages and are more motivated to learn?

A team of researchers at the Auditory Neuroscience Laboratory at Northwestern University found that people who study a musical instrument are better able to process foreign languages because they are able to hear a difference in pitch and the music strengthens the auditory cortex. Nina Kraus, Hugh Knowles Professor of Communication Sciences and Neurobiology and Director of Northwestern’s Auditory Neuroscience Laboratory explains, “Music training is akin to physical exercise and its impact on body fitness; music is a resource that tones the brain for auditory fitness.” (Skoe, Kraus)

At Stanford University, two studies showed that mastering a musical instrument improved the way the human brain processes parts of spoken language. When students have ongoing musical experiences throughout their lives, they are able to detect small differences in word syllables and are able to distinguish split-second differences between rapidly changing sounds—two components essential to processing language. (Sturrock)

Students involved in the arts have increased sustained attention and are more persistent and willing to take risks—qualities needed for future jobs. They also have increased educational aspirations. (Critical Links: Learning in the Arts and Student Academic and Social Development)

#8: The Arts Contribute to an Increase in Self-Esteem and Problem-Solving Skills

For at-risk youth, the arts contribute to lower recidivism rates, increased self-esteem, the acquisition of job skills, creative thinking and problem-solving and communication skills. (The Impact of Arts Education on Workforce Preparation)

Schools with music programs boast a higher attendance rate than those without programs: 93.3% compared to 84.9% (Harris Interactive Poll) 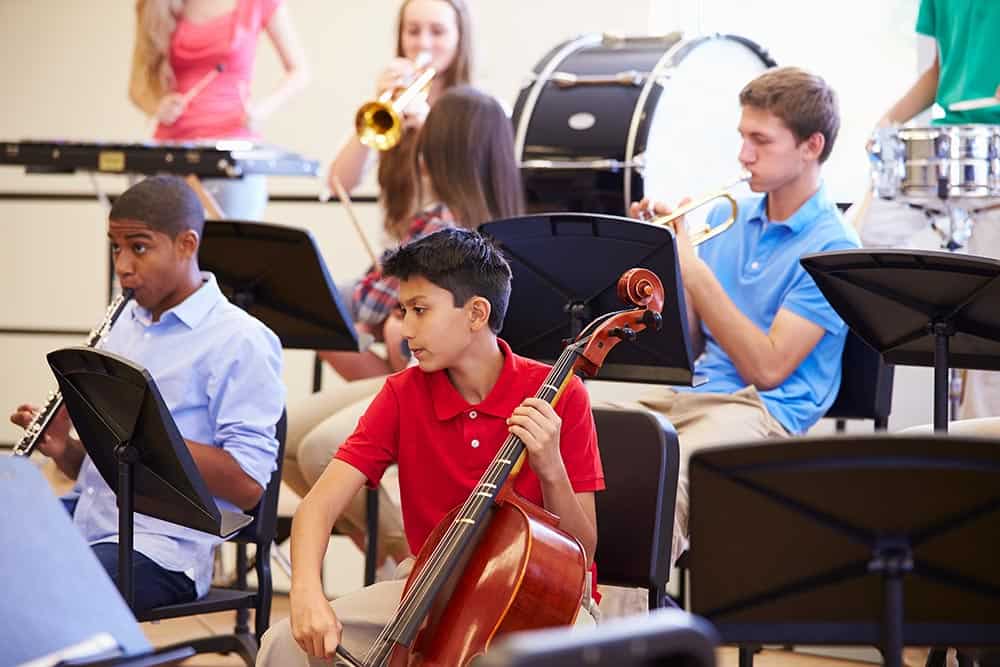 Music in Our Schools: The Difference Parents Can Make 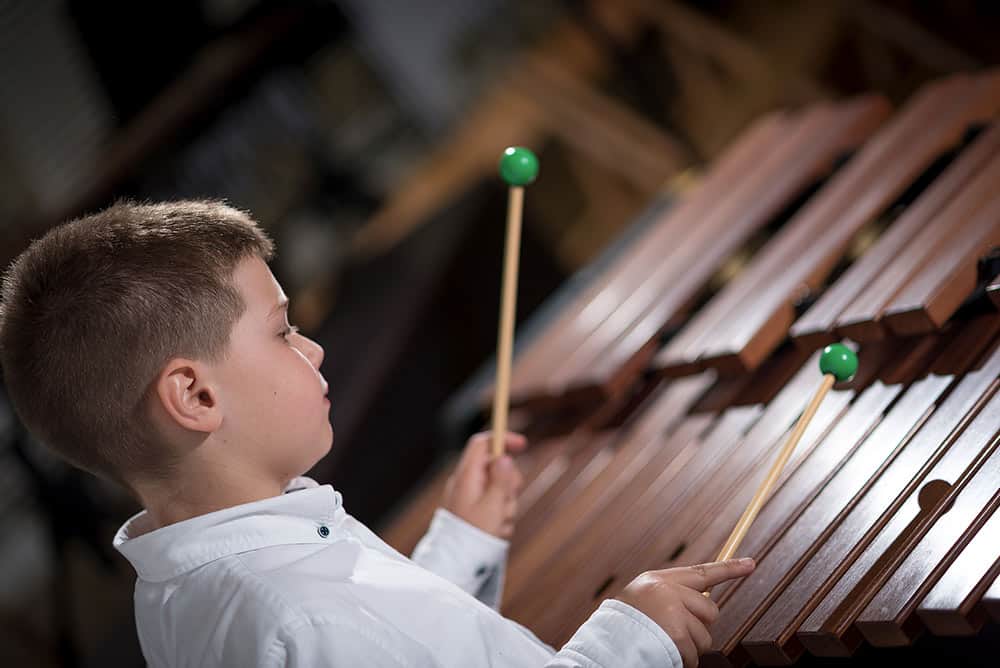 If your child’s school does not offer music programs–be a music advocate! The law is behind you!

I have found that once parents understand how music can help their children learn, they want strong music programs in their schools that include singing, movement, instrumentation, band, and orchestra.

Some school districts offer these comprehensive music programs with multiple music teachers but many do not. And the majority of schools do not offer music programs until the child is in grade four and then it’s optional.

If your school music program doesn’t exist or is optional, or the program only has one teacher for 1000 students—it’s likely a problem of funding or a lack of prioritizing music programs.

Either way, music in the schools is now federally mandated law and all schools need to offer something.

Here are 4 ideas, parents can take to advocate for mandatory school music programs (keep in mind—this is just the beginning)

#1: Educate the Administrators on the Importance of Music Education

Bring the 12 studies on this blog to the attention of your school district. They are educators and have a responsibility to understand how students learn best. And music is a key component in education and lays the foundation for learning.

Let your school district know that music in the schools is a federal law and all children must be enrolled in a school music program. Music classes are not optional.

If school administrators tell you there is no funding or very limited funding for school music programs, find out how much money is going into computer programs and find ways to divert this money into music programs.

There is overwhelming research showing that children do not need computer time at school (maybe in high school—but not in lower grades). Most kids have been exposed to computers at home and they should not be sitting in front of a computer screen that gives limited learning, causes eye strain, headaches, and other physical issues. 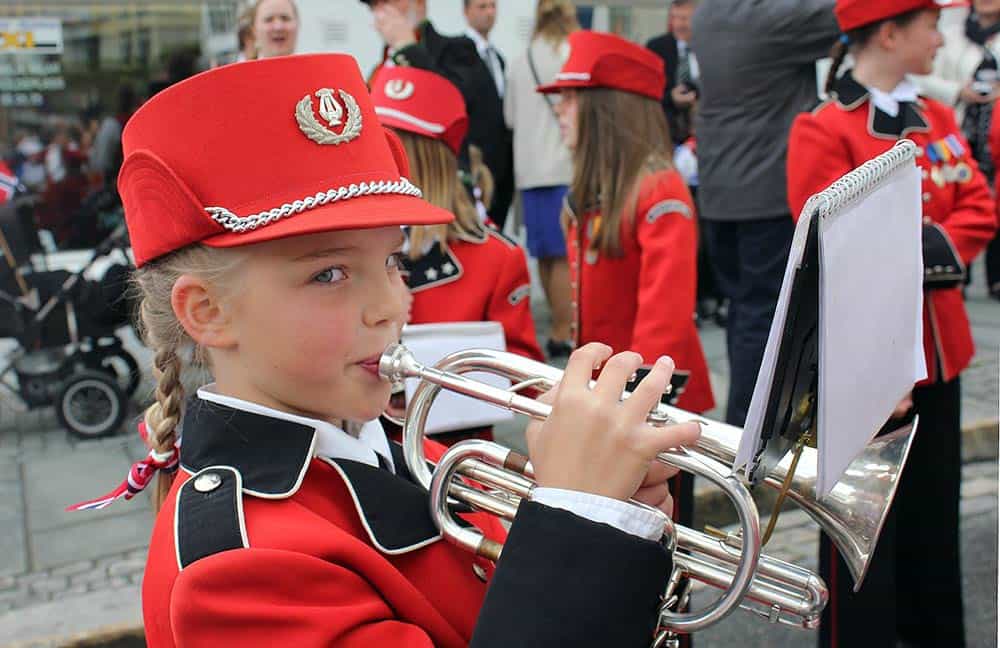 When your child is involved in school music programs–they form lasting and powerful memories of how it positively affected their learning and lives!

Many PTAs work hard to bring some type of music exposure to children in their schools. Some offer quarterly music appreciation classes, and others bring in musicians for hands-on music learning. I’ve been involved in many of these programs and although they don’t take the place of music instrumentation or a chorus program—it’s a beginning.

Don’t Give Up—Let Your Voice Be Heard!

Change happens when one small voice of dissent doesn’t give up. As more parents are made aware of the value of arts education—together your voices will gather momentum and turn into a powerful chorus that can bring music into the lives of children one school at a time.

Tell us about the music programs that are offered in your schools. Are you happy with them? Why or why not? Please comment in the section below. 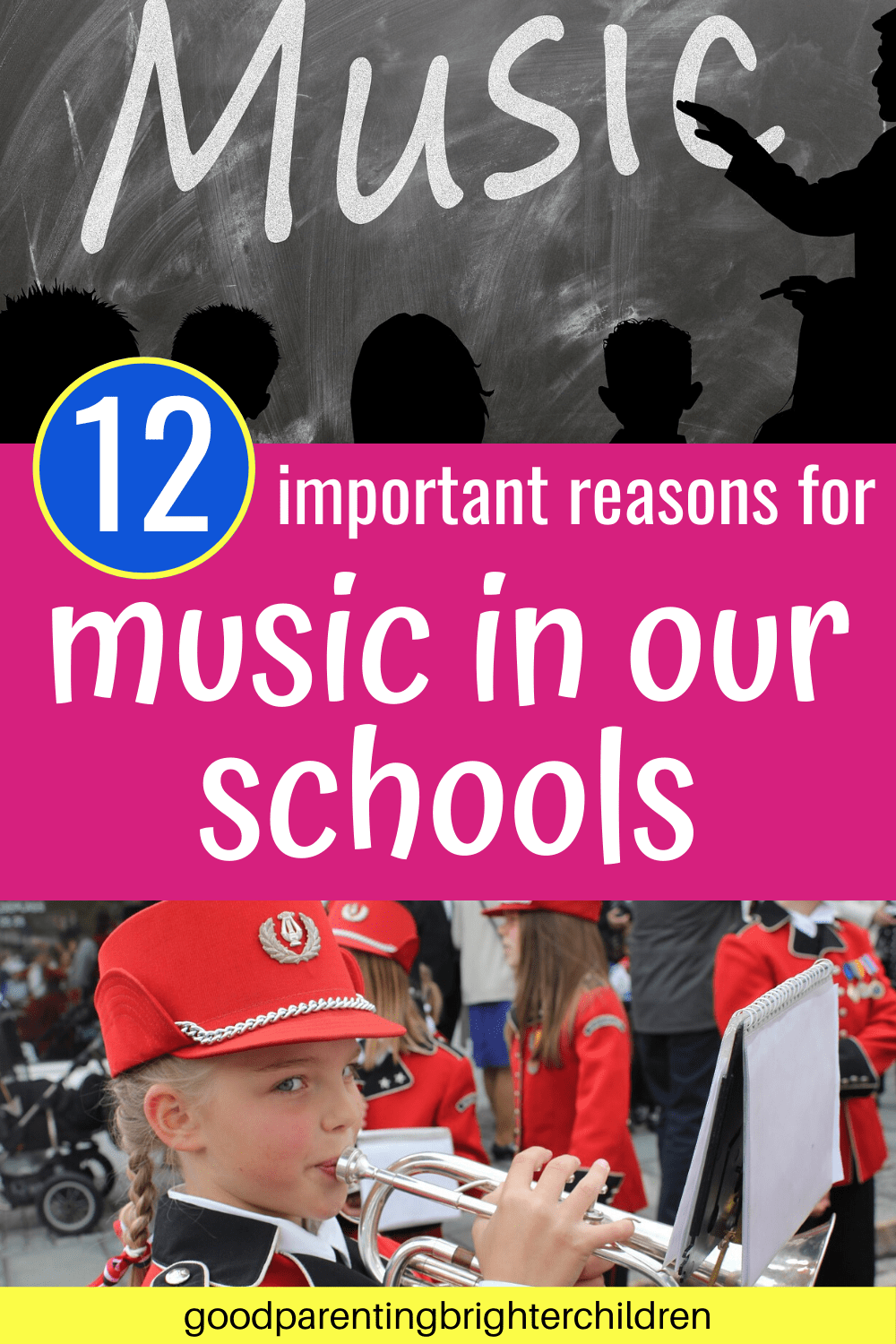 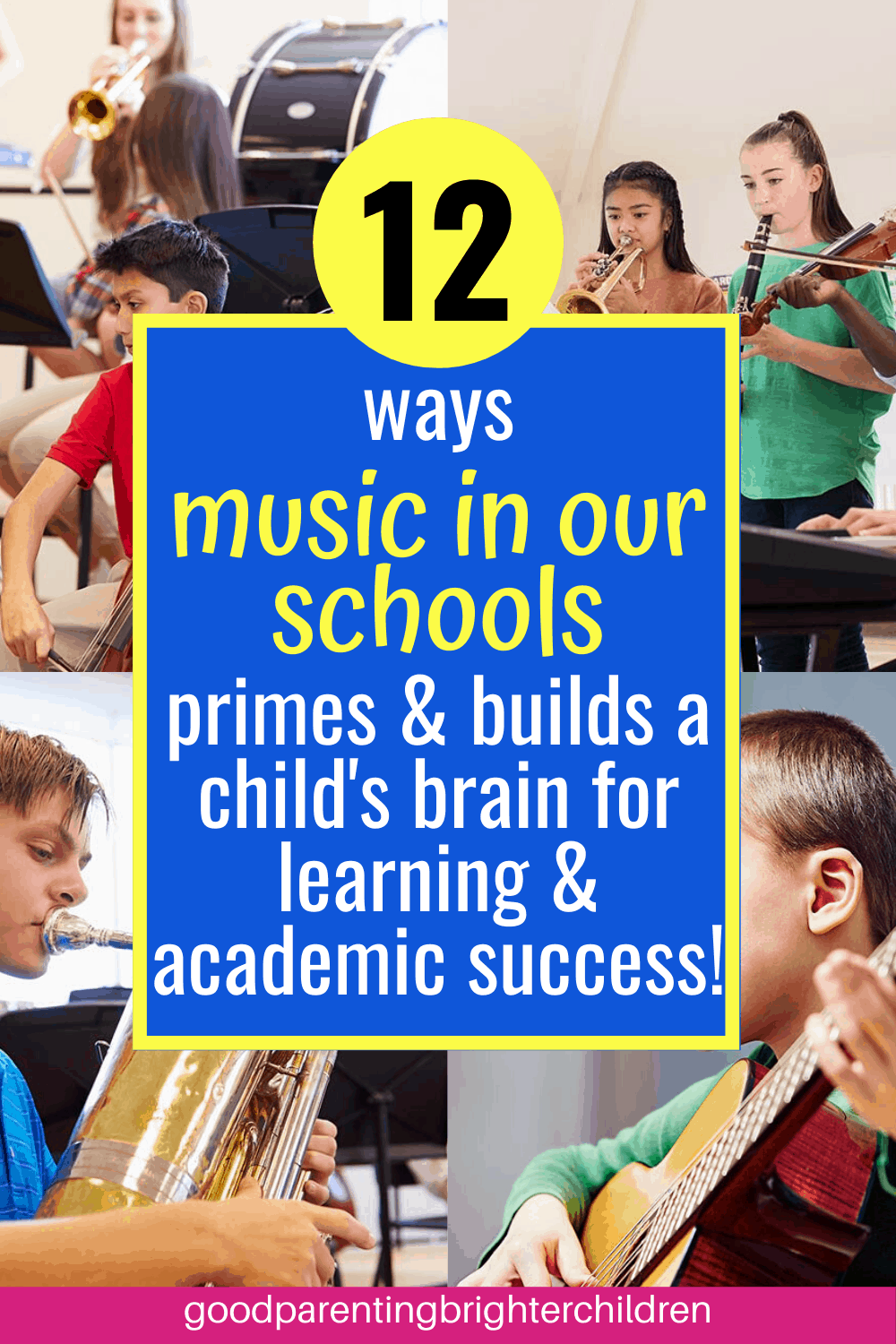 TAKE A WILD GUESS: WHAT DO QUEEN ELIZABETH 1, KING