In the late 19th and early 20th centuries, orphanages for babies were called foundling homes. The death rate in these homes was nearly 100%. Although the children received enough food, and the shelter and clothing were adequate, they still continued to die. 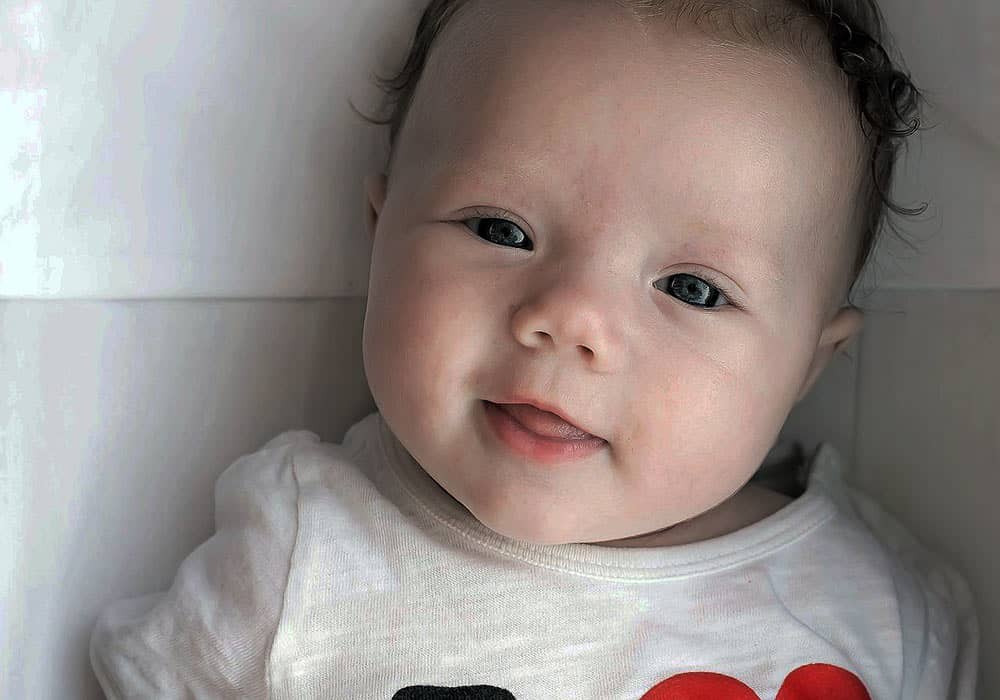 It’s so important to hold, cuddle, sing to, and love your newborn. Researchers know that a baby less than one-year-old will die without enough love.

When a baby came into the home, the caretakers would enter, “condition hopeless” into the records, knowing too well that eventually, the baby would die. This condition became so prevalent that it was even given a name: “marasmus,” a Greek word meaning “wasting away.”

No one could find a cure because they were unable to trace the cause of the malady. Then quite by accident, both cause and cure were discovered.

An elderly woman was hired in a German foundling home. Each day this kind woman went from child to child, holding them, talking to them, singing lullabies and caressing them. Miraculously, the babies began to thrive.

It was then that the authorities realized that these infants had been dying from a lack of love. Researchers now know that a baby less than one-year-old will die without enough love.

How is love communicated to babies? One way is through singing to your baby.

Mothers throughout the ages have communicated love and warmth to their infant child through singing lullabies and songs and through touching and talking. These simple activities will give your baby a feeling of security and protection.

The late Peter Ostwald, professor of psychiatry at the University of California, San Francisco, found music to be a strong conveyer of love and security between mother and baby.

In his research, he noticed that infants respond positively to the musical qualities of their mothers’ voices. When the mothers sang lullabies to their babies, it signaled to the baby that it was safe to go to sleep. Ostwald also found that if you sing to your baby, he/she will have a much stronger emotional bond with you. 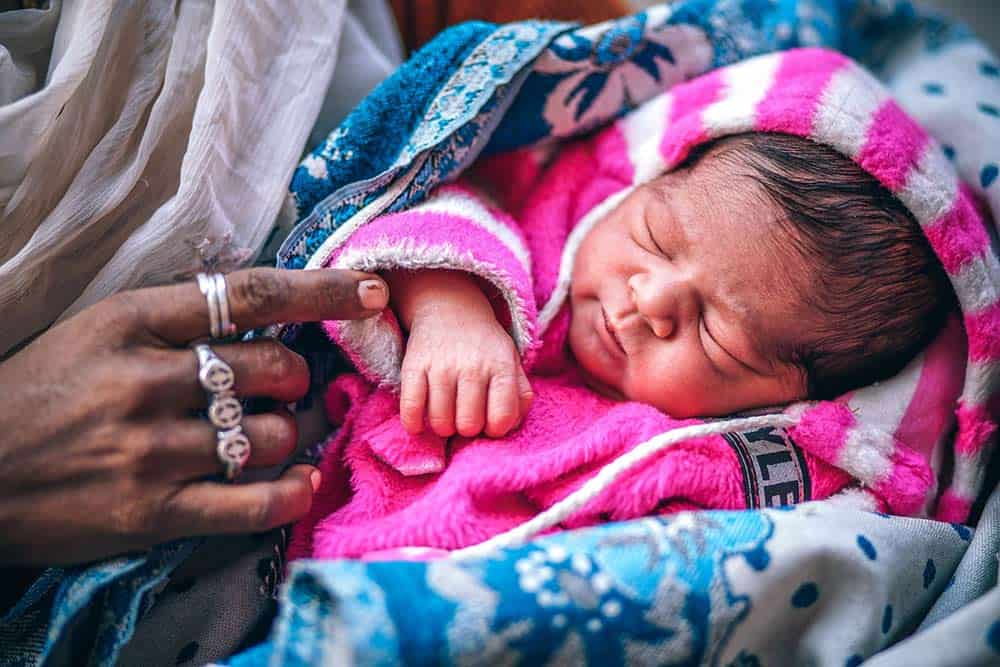 Singing lullabies to your baby translates into early language skills

Classical Music for Babies: How Early Language in Babies is Affected by Singing

Language occurs as a gradual process. First, the baby in utero moves in a rhythmic motion, much like the rhythms and cadences found in speech. After birth, a baby hears and responds to the musical tones of the mother’s voice as she communicates with her tiny infant.

“Motherese” is a term that some psychologists use to describe the speech patterns a mother uses when she talks to her baby. It is highly rhythmic musical jargon between parent and baby and not only strengthens the child emotionally but helps with his budding language development.

As you sing to your infant, he/she will wave their arms and kick their legs in rhythm to their mother’s voice. As you coo and talk to your baby, he/she will respond with noises and coos similar to your voice. 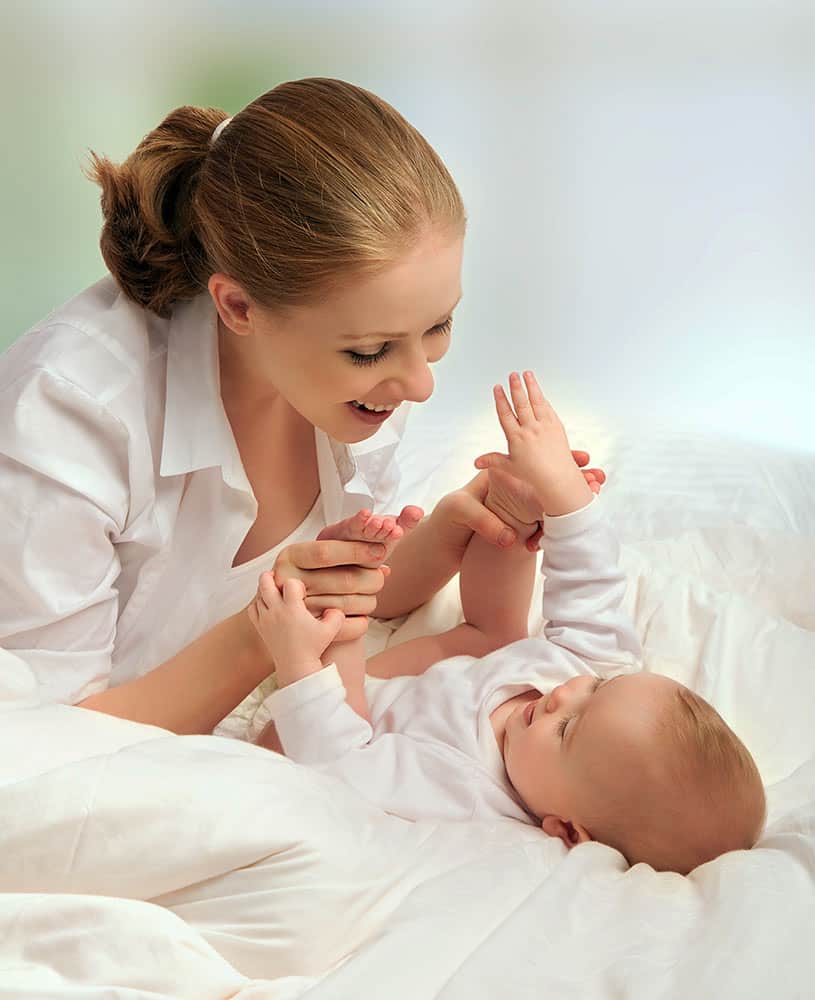 As a mother sings to her infant, he will wave his arms and kick his legs in rhythm to his mother’s voice.

Researchers have found that babies less than 6 months old are actually able to “sing” back pitches and simple melodies that are sung to them.

Patricia Kuhl, a professor of speech and hearing sciences and co-director of the Institute for Brain and Learning Sciences at the University of Washington in Seattle, discovered this to be true in a study that she and her colleagues completed.

They found that the mother’s singsong melodious cadence with fluctuating pitches is nature’s way of teaching the beginning of language to the receptive infant. Remarkably, studies have also found that babies as young as 4 months can recognize out-of-tune notes and changes in melodies, all of which add to early language development.

Dr. Robert Garfias, professor of anthropology at the University of California at Irvine, believes music can have a tremendous impact on language development in children.

Through research, he has found that music and language are inseparably linked as a single system in the brain. This system is acquired in the earliest stages of infancy and continues as the child processes the sounds of human voices around him.

The Connection Between Singing, Math, and Learning Languages

Additionally, singing songs to infants may influence how quickly the child later learns math and languages.

The late Eric Oddleifson, former chairman of the Center of the Arts in the Basic Curriculum (now known as Arts Learning at Walnut Hill School), talks about a Japanese master mathematics teacher whose almost 2 million students have demonstrated math abilities beyond their years. This teacher was asked, “What would you say is the most effective way of heightening children’s mental ability at the earliest possible stages?”

He answered, “The finest start for infants is to sing songs. This helps to elevate their powers of understanding, and they register astounding speed in learning math and languages.”

Singing to your baby is important, but while they are falling asleep at naptime or bedtime, play selections of classical music for your child. Because of the complexity of classical music, it will also help with speech and language development. 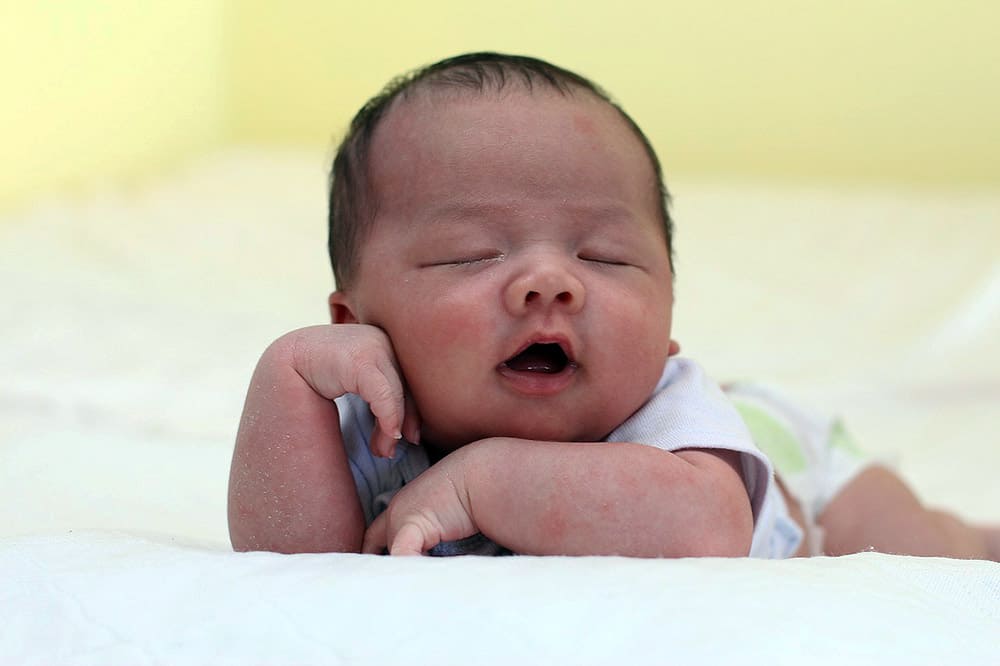 As your baby is falling asleep, play classical music for them. The complexity of the music has been found to help with the baby’s speech and language development

Try playing these classical music selections by the great classical composers. Check out Spotify to easily download these for free. Your baby will fall asleep as their speech and language skills are developing:

Here are some specific CDs that are wonderful to play for your baby at bedtime:

CAUTION: The Dangers of Playing White Noise to Your Babies

Recent research by the American Academy of Pediatrics (AAP) has found that playing white noise for your baby may result in delays with speech and language.  Why? Because the noise literally tires the brain.

White noise is a noise that blocks out the sounds around the baby while he/she is sleeping. It’s simply that…noise.  It’s not beautiful, it’s not brain-building, it’s not helping your baby grow and develop. However, classical music will also block out noise, but it builds your baby’s brain, it increases speech and language development, and your baby’s ability to memorize and learn. It will NOT tire your baby’s brain.

Some of the problems with white noise are:

FEW babies react well to white noise. And ONLY if it is over 7-feet away from the baby and is at a very low decibel level (why bother?).

If you want your baby to grow into a healthy, happy, smart child, play classical music for her/him during naptime, bedtime, and playtime. There is a MASSIVE amount of research (I’ve been gathering it since 1979) to show how classical music builds a child’s brain; making them smarter, more well-adjusted, happy babies.

Classical Music for Babies: 8 Musical Experiences for Your Baby (Birth to age 2)

Here are 8 musical experiences to do with your baby that will increase his/her intelligence and aid in the acquisition of early speech and language.

#1: SING DAILY TO YOUR BABY AND CHILD

Sing or play songs to your newborn as often as possible throughout the day, especially while you are bathing, dressing and feeding her or in the car, etc. Continue singing to your toddlers. These activities will build your child’s early language skills. 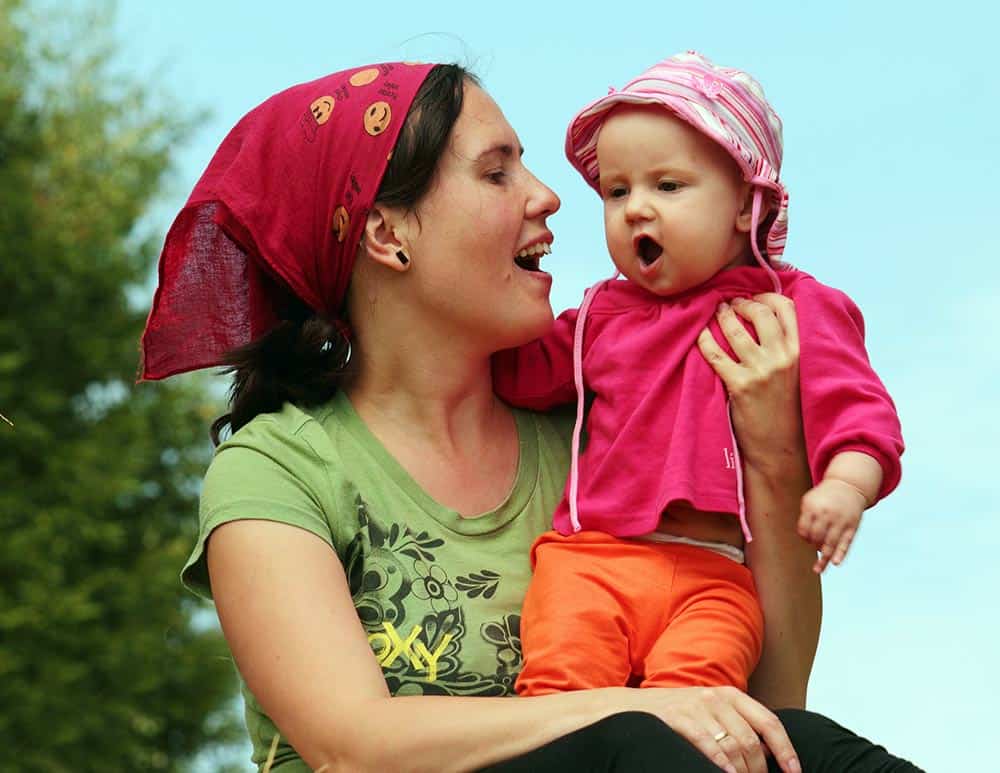 Sing to your baby every day. Researchers have found that babies will mimic the sounds and cadences of their mothers’ voices.

At night, play soothing classical music or vocal lullabies as he/she falls asleep. Choose a variety of music and observe which ones your child prefers

Play musical games and fingerplays. Clap the beat as you sing, and take her hands and clap the beats along with her. She will pick up the rhythm very quickly. Here are some suggestions for some fun fingerplay songs that babies and children love: 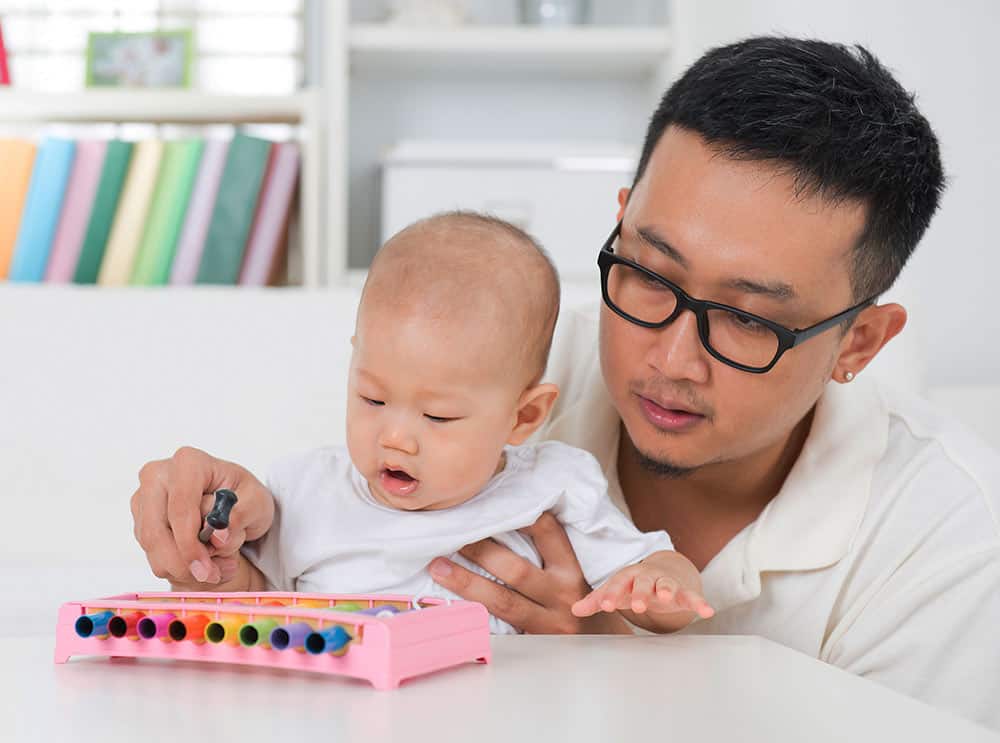 As you sing to your child, vary the tempo, the pitch, the softness, and the loudness of your voice. Make your voice go up and down from low sounds to high sounds.

Encourage your child to mimic the musical sounds and songs you sing to him. The Papouseks, developmental researchers from West Germany found that infants as young as 2 months old were able to imitate the pitch and intensity of the songs their parents sang to them.

#7: MUSIC IN THE COMMUNITY

Expose your child to age-appropriate musical experiences and classes offered in the community. Check out my blog on music programs for ideas

Videotape your musical experiences together. Later, your children will love watching themselves creating music as toddlers

This is a partial excerpt from my 465-page book, Good Music Brighter Children. Check it our for dozens of ideas, suggestions, etc., on how to use music to raise a brighter, happier child.

What experiences do you have with singing to your baby or toddler? Did you notice early development in speech and language? Please share in the comment section below. 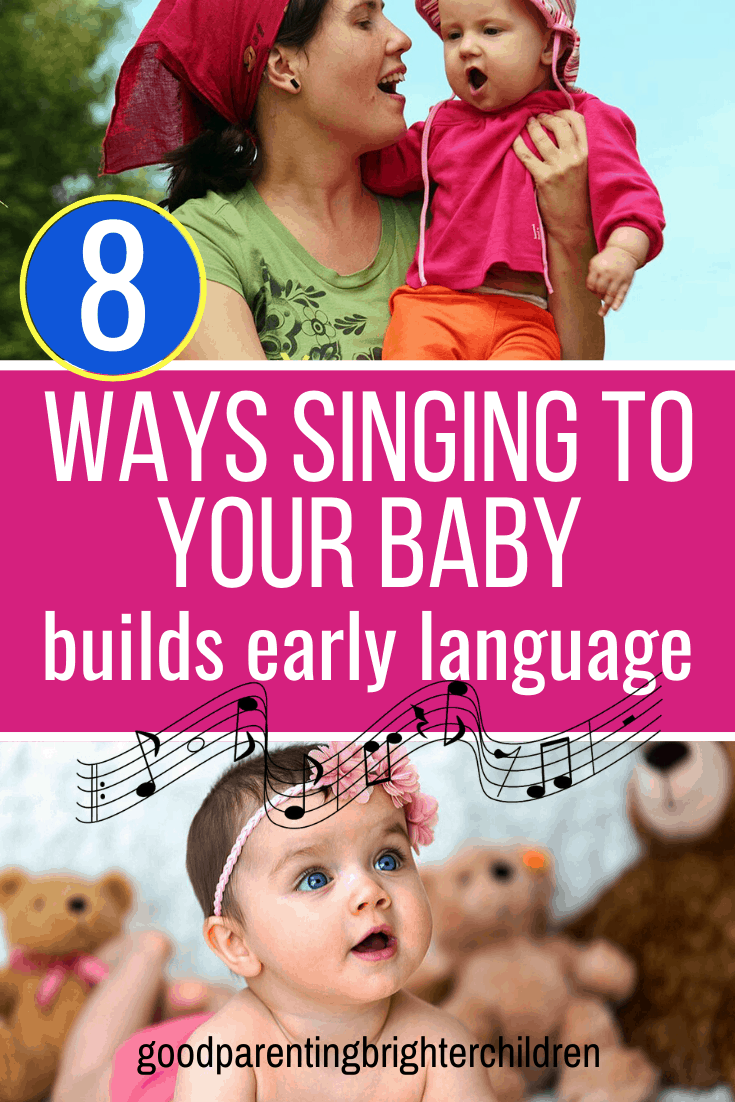 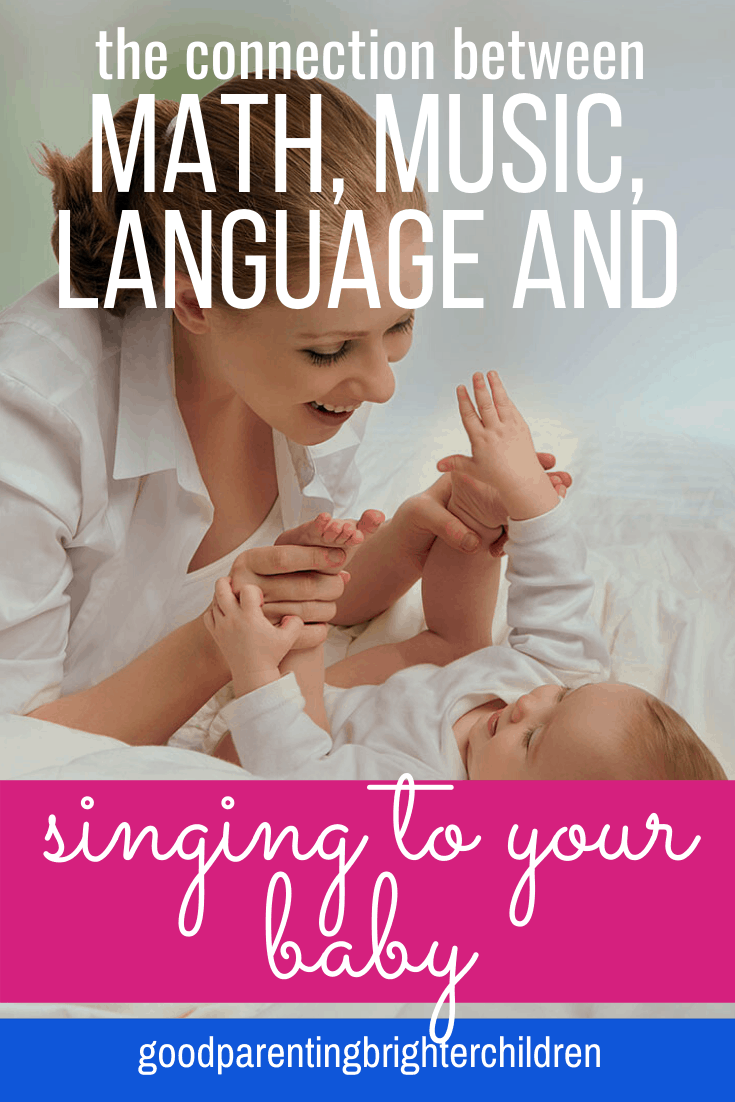